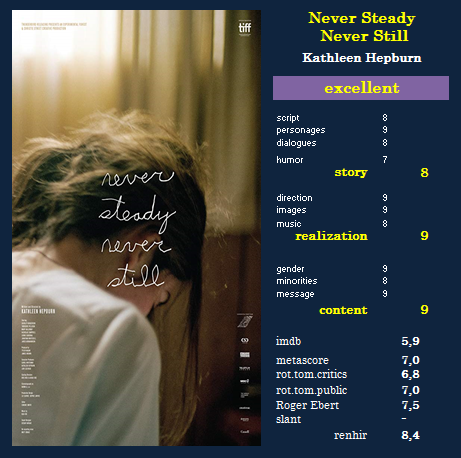 This sober but intense movie contrasts the inhumane landscapes of Alberta (Canada) with the survival drive of a woman with Alzheimer’s disease.
Fantastic photography of these unforgivable landscapes in which nothing good can happen, in which life cannot be but a struggle and death’s a part of everyday life: you wouldn’t know you’re on planet earth!
Extraordinary performance by Shirley Henderson: “She pulls off the most difficult and effective illusion of all, which is to make it look as if she’s living through what she’s acting. This is not the sort of screen acting that wins awards, I fear—it’s too subtle. But if you don’t treat yourself to this movie, you will indeed be missing out on one of the best pieces of acting 2018 cinema has to offer.” [Glenn Kenny]
Cast: Shirley Henderson, Théodore Pellerin, Mary Galloway, Nicholas Campbell, Jared Abrahamson, Hugo Ateo
Director: Kathleen Hepburn
Writer: Kathleen Hepburn
Music by Ben Fox
Cinematography by Norm Li
Film Editing by Simone Smith